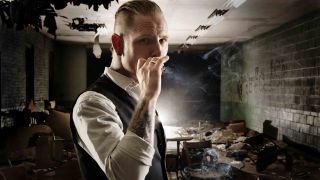 Stone Sour are premiering a video for their cover of Metal Church’s The Dark as featured in frontman Corey Taylor’s film debut Fear Clinic.

The updated version of the title track to Metal Church’s second album is included in the 2014 movie, set to be issued on Blu-ray/DVD this week in North America and on March 30 in the UK.

The singer snagged the gig after Metallica bassist Robert Trujillo turned it down and recommended him to Hall.

Taylor tells Full Metal Jackie: “Rob had offered Robert the role, but he couldn’t do it as he was going to Antarctica with Metallica. He put us in touch and within two weeks I was on the set. It was pretty sweet.”

“I had always wanted to be in a movie and try my hand at it. It was a fantastic learning experience and I learned a lot just from watching everybody. I really got into it and grew a moustache for the part so I could look extra creepy.”

Taylor and Stone Sour began work on a covers album in October. The follow-up to the two-part House Of Gold And Bones project is titled Meanwhile In Burbank and is expected later this year.

Meanwhile, Taylor’s Slipknot have just completed a UK and Ireland tour and will return to headline Download in June.