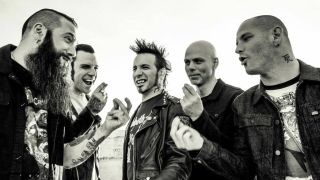 He’s been standing in since Root split with the band in bad blood in 2013 – a development that was made public last May.

Asked on Facebook whether Martucci is a full-time member, Stone Sour reply simply: “Yes.” The comment has since been removed but Blabbermouth have a screengrab.

Root and Corey Taylor continue to work together in Slipknot. The frontman last year admitted there had been some “confrontation” over the situation but it was resolved before work began on .5: The Gray Chapter.