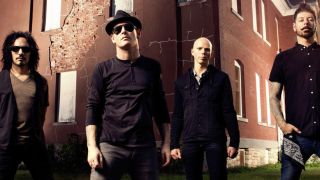 Stone Sour, the Slipknot offshoot led by frontman Corey Taylor, have split with Slipknot guitarist Jim Root – and Root has admitted he's "not happy about it."

But Taylor says they’ll continue to work together on their other outfit’s studio project.

Slipknot are currently recording their first album without late bassist Paul Gray, who died in 2012, and without co-founding drummer Joey Jordison, who was fired in December.

Taylor’s band say in a statement: “Stone Sour and Jim Root have indeed parted ways. We were trying to wait until the completion of the new Slipknot album – but in light of recent events, we are going to confirm this information and move on.

“We feel it’s best for both bands and hope that is reflected in the days to come. We will give you more information when the time comes.”

Taylor also confirms: “Jim and I are still working together in Slipknot, and the album is almost done.”

Root didn’t take part in Stone Sour’s recent US tour, the official reason being that he wanted to concentrate on writing material for the Slipknot project.

Blabbermouth reports that Root responded to a fan query about Stone Sour by saying: “I’m not in that band any more. Not my decision. Not happy about it.”