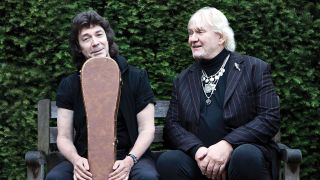 Steve Hackett has been discussing his time in Squackett, the side project he formed with Yes bassist, the late Chris Squire.

Hackett has been entertaining fans during lockdown with a variety of videos, some featuring him playing acoustic guitar, some with him talking fans through a selection of Genesis and his own solo material. Now he's released a new clip discussing the Squackett project, which released their sole album A Life Within A Day in 2012

"I just get carried away by hearing it," says Hackett. "In a sense you get the feeling of what it might have been like if Genesis and Yes had got together; the Genesis of a certain era and the Yes of a certain era. A lot of this stuff was out together in the living room as we were just talking away. Very happy memories."

Hackett's autobiography, A Genesis In My Bed, will be released this July. You can watch the vide clip about Squackett in full below.