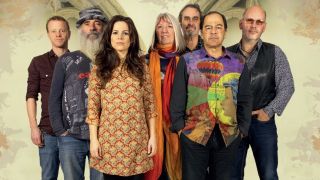 Steeleye Span will release their new album in June. EST'D 1969 will be released on June 24 through Park Records. The follow-up to 2016's Dodgy Bastards is an all new collection of material from the seven band members and features an appearance from Jethro Tull's Ian Anderson on the track Old Matron.

"EST’D 1969 captures the ethos of the heritage and history of the band itself, but also the rich vein of tradition that they draw inspiration from, but remains fresh and contemporary," say the band. "This is a celebration of 50 years but the band continues to look to the future."

The band have also announced a string of live dates for November and December as well as some festival appearances this summer, including Glastonbury. Steeleye Span will play: