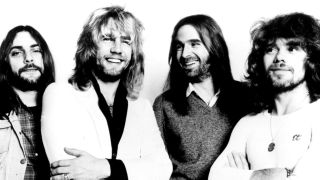 I first became aware of Status Quo when they had their first hit with Pictures Of Matchstick Men.

But I first got to know them when me and Dave got together, and we done a couple of shows with them. We actually did their farewell concert in 1984, so that’s when we got to know them personally. And I got to know Francis pretty well. He said his dad was a big Chas and Dave fan. I remember him saying: “My dad told me: ‘Study them boys, they’re good.’” Even before getting to know them I was a fan. I always thought their pop stuff stood out among the other gear that was coming out. Later, as a rock band, they had a good way of doing pop records in a rock way, and most rock bands didn’t.

What Quo do is inimitable. There’s only one Status Quo, like there’s only one Chas and Dave. People often say to us that what we do looks deceptively simple. But it obviously isn’t. A lot of work has gone into it. But when you get up on stage it’s very important for an entertainer to make it look like you just thought of it. That’s what Quo do, and that’s what we do.

Going out on the road with them was fantastic. We’d been talking about it for years. Finally last year it worked out that we could do about twelve dates in December. We felt it’d be good, but it was actually better. For a start, a lot of punters usually stay in the bar till the main act comes on, but we got a full crowd at each gig and went down great. It was absolutely excellent.

Getting to mix with them between shows was great as well. As with all your rock’n’roll mates, you only ever meet briefly on the road, like ships in the night. But when we’re on the road together, like we were with Quo, we’ll sit there jawing till dawn.

There’s similar chemistry between Francis and Rick as there is between me and Dave. We both get off on each other’s music. Before me and Dave got together I’d known him for a good ten years. We were both bass players in different bands, but we found we had almost identical tastes in music. And that’s what Rick and Francis have. They’ve also been there a long time and they’re good musicians, they know how to put on a good show and there’s no old flannel with them. I’ve come across bands over the years who’ve been a bit weird, and I think it’s a lack of confidence that makes bands go a bit bolshy. But people like Francis and Rick are confident in what they do and so they’re great blokes.

We share musical roots. It’s all about the boogie. It’s crowd-pleasing stuff, and that’s how entertainment should be. I mean, my mum was a great entertainer, a great piano player. Me dad died when I was four, so there weren’t a lot of money about, and she brought us up by playing the piano. I discovered at a very early age that apart from putting food on the table the piano put smiles on faces. When relations would come round, the piano was played and they were happy, smiling and singing. So I thought: “That is the life for me.” And this is what music should be. It should make you feel happy. And that’s the music that we play and the music that Quo play. People go away with a smile on their face.