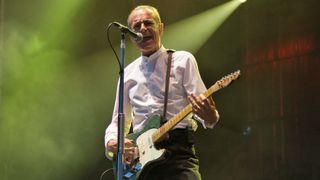 Status Quo have announced that they’ll plug their instruments back in for an all-electric UK tour later this year.

The band played several dates across Europe in October and November last year which were due to be the group’s last ever electric performances.

But following the death of guitarist Rick Parfitt on Christmas Eve 2016, vocalist and guitarist Francis Rossi says that the landscape has now “shifted” and they want to give fans what they want – a full electric tour.

Rossi says in a statement: “This has been a year like no other and in many ways the band has felt out of control. Rick’s passing was a huge blow.

“Much of what we had planned was envisaged initially to accommodate what would be right for him – those sands have obviously shifted and now everything has changed.

“The band is not the same – it can’t be and shouldn’t be – and the plan has changed too. We’re still listening to the fans, we always have, and we’re hearing that this is what they still want. We’re going to give it to them.”

The run of shows will begin at Manchester’s O2 Apollo on November 26 and take in further dates in Sheffield, Cardiff, Reading, Bournemouth, Wolverhampton, Glasgow, Newcastle and London. Find a full list below.

Tickets for the Plugged In: Live And Rockin’ tour are on sale now.