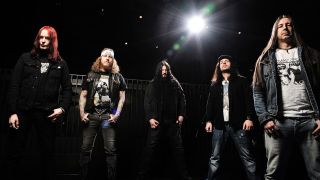 Spiritual Beggars have released the title track of their Sunrise To Sundown album, the follow-up to 2013’s Earth Blues. The album is released on March 18 via InSideOutMusic.

“I wrote Sunrise To Sundown last year and brought into the jam room, where it very quickly went from a basic idea to a finished arrangement in something like five minutes!” says guitarist Michael Amott. ”Some songs come fast and others take time to fully develop, you never know when inspiration hits you…and therein somewhere lies the beauty of creating music. The lyrics follow that train of thought too, talking about following your chosen path and turning your dreams into reality - two things I believe in very much.”

“I’m super excited about how the album sounds sonically,” he continues. “Our engineer Staffan Karlsson also produced and mixed the album, and the result is something we’re very proud of. I think every album we have made has had its own vibe and atmosphere. I can honestly say this band has never made the same album twice. To me, Sunrise To Sundown is the next chapter of the book we’ve been writing since we started the band over 20 years ago. Of course, the foundation of our style is heavy rock music, but we always keep evolving adding new influences and colours to the bands core sound.”

Spiritual Beggars tour in March and April (dates below).