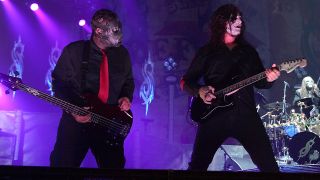 The guitarist was speaking with Vice’s I-D when he was asked if he remembers his dreams.

Root replies: “I’m sort of going through… not a bad break-up, but I’m in a toxic relationship that I’m exiting. I’m kind of ghosting someone right now. It’s just very unhealthy.

“I don’t wish anything bad or malicious on this person, I just want them to get better and be happy with themselves. So I’ve been having a lot of bizarre dreams about deceased people lately.

“Paul has been showing up in my dreams a lot.”

When asked if dealing with that has been hard for him, Root says: “It’s a little bit weird. Maybe I haven’t fully grieved Paul being gone, maybe I shoved that somewhere deep down inside. But in the dream, he had come back to life.

“He had passed on but he was alive and with his wife, his widow, and they were in this blue sports car. He was typical old Paul, but he was a reanimation of himself, like a zombie.

“So it stirs up a bunch of weird emotions and I’m thinking that maybe it ties into the situation I’m in now. Because I know there’s a person inside there, but I think they have some narcissistic, possibly sociopathic tendencies.

“Maybe that’s what that dream meant… because it’s Paul, but it’s not really Paul, you know?”

Gray died in May 2010 of an accidental overdose, with the band paying tribute to him on their 2014 album .5: The Gray Chapter.

Slipknot are currently on tour across Europe in support of their 2019 album We Are Not Your Kind.

The run will come to an end in Helsinki on February 24, with the band then visiting Japan, Indonesia and the Philippines, before their Knotfest Roadshow tour across North America throughout May and June with A Day To Remember, Underoath and Code Orange.

Slipknot will return to Europe over the summer for Knotfest UK at The National Bowl in Milton Keynes and Knotfest At Sea.