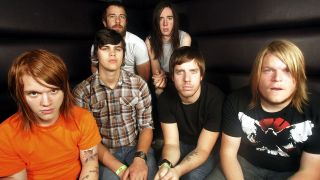 Following a brief hiatus, Underoath returned to us in 2015, reminding metalcore fans across the planet just how versatile a genre it can be. The scene has grown stagnant, but Florida’s sons have always injected more ‘post’ elements into their melodic aggression, refusing to rely on the old sing-a-bit-scream-a-bit-breakdown combo. Over their two-decade lifespan and seven studio albums, Underoath captured the hearts of countless metalheads, including Robin Mariat, bassist for pummelling French metalcorers Resolve.

Here, Robin speaks about the ten best Underoath songs of all time, chosen as a collective by Resolve.

You’re Ever So Inviting

“If I had to pick one song to turn someone into an Underoath fan, this one would be a strong contender. Every vocalist is at the top of his game, including guitarist Tim McTague and his awesome shouty/screamy contribution.”

“There’s no better tune than Disambiguation’s opener to prove that Underoath without their original drummer were, although slightly different, still just as brilliant as they could have been before.”

A Fault Line, A Fault Of Mine

“Lost In The Sound Of Separation is maybe the outsider in Underoath’s discography in that it sounds so raw and tortured. But this track leans more toward their earlier sound; it has kind of a punk vibe to it as well which is a nice change of pace in the album.”

Too Bright To See, Too Loud To Hear

“Arguably Aaron Gillespie’s best vocal performance. I guess the lyrics can be polarising depending on your faith, but no matter what, that ending is singalong heaven.”

Casting Such A Thin Shadow

“When it comes to post-rockish, spacey interludes, nobody does it better than Underoath. I remember obsessing over this track for days when I first heard it; to me it embodies the overall Define The Great Line’s vibe within six minutes.”

“To be fair, all of us in Resolve are too young to have experienced Underoath at the beginning of their huge success. But this song was one of the first I heard from the noughties ‘core’ era, and I can easily picture with this opening track why Chasing Safety has been such a game-changer for this kind of music.”

In Regards To Myself

“Another massive album opener. The beginning riff, the pull yourself together chant, everything about this track is iconic.”

The Only Survivor Was Miraculously Unharmed

” This starts with the sludgiest, nastiest riffs and ends with one the most captivating pieces of music this band have ever written. The vocals in the background never fail to give me the chills every single time I spin it.”

Writing On The Walls

“This could also have been A Boy Brushed Red…, but there’s a reason why both these tracks are the staples they are. WE WALK ALONE!”

“The final album’s closing track is a wonder of ethereal guitars and keys. Spencer Chamberlain’s singing fits the vibe perfectly. The lyrics are might be my all-time favourites from Underoath, and that’s just a wonderful epitaph… until the next record, eh?”

Resolve’s debut EP Rêverie is out now. Watch their new video for Navel-Gazing below.