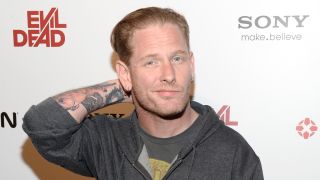 The film, directed by Robert Hall and also starring A Nightmare On Elm Street actor Robert Englund, will receive its world premiere at the Screamfest Horror event in Hollywood on October 22.

And to mark the announcement, a trailer for the movie has been release. View it below.

The director initially approached Metallica bassist Robert Tujillo for the role as Bauer, a clinic worker, but he turned the offer down and suggested Taylor for the part instead.

Taylor tells Full Metal Jackie: “Rob had offered Robert the role, but he could’t do it as he was going to Antarctica with Metallica. He put us in touch and within two weeks I was on the set. It was pretty sweet.

“I had always wanted to be in a movie and try my hand at it. It was a fantastic learning experience and I learned a lot just from watching everybody. I really got into it and grew a moustache for the part so I could look extra creepy.”

Hall says Taylor’s part in the project elevated the film to a “whole new level” and insists Slipknot fans will “freak” when they see it.

He says: “Working with Corey was amazing. He’s such a huge horror fan and his enthusiasm and excitement shine through. His involvement brings the film to a whole new level.

“Fans are going to freak when they see him in the role.”

Last week, Slipknot revealed their new masks in The Devil In I promo ahead of the release of .5: The Gray Chapter, which launches on October 20.

The band are also the cover stars of this month’s Metal Hammer magazine and along with their first interview since returning, the edition is packed with exclusive photos. Copies can be directly purchased here while the digital version can be bought on iTunes.