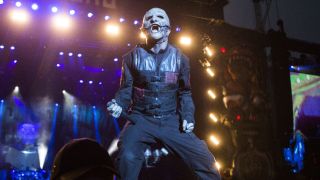 Last week, the vocalist accepted that he should have taken more time to recover after breaking his neck. But with the band’s tour with Marilyn Manson rolling along, Taylor reports that things are going better than expected.

He tells Billboard: “I’ve been damn near on, pitchwise. My stamina’s a lot better. It’s like I’m really kind of filling in all these weird blanks in the music I never even realised were there.

“I love the challenge of it. It’s being able to tune in even more to the music, really being in it, more than I ever was before.”

He says he’s had to reassess what he can and can’t do onstage, and adds: “Up to this point I didn’t realise how physical I am when I sing – even more than just headbanging or jumping or running or any of that stuff.

“I punctuate physically when I sing, and I never realised that before. Even the first few shows I was finding I had to hold myself back from more than just the headbanging. I would do something and it would be like, ‘OK, that hurts – we can’t do that for awhile.’ I’ve had to reassess what I do live. But the positive for me is I love the challenge of it.

“I love the fact that it’s like, ‘Well, OK, maybe I’ve relied on those things for too long. Let’s see if I can get through a show or a tour without having to go to these kind of mainstays,’ and the shows have been great, so it’s working.”

Earlier this month, it was confirmed that Taylor would guest on Korn’s 12th album The Serenity Of Suffering. And Taylor says when the call came, he jumped at the chance to lay down a track with Jonathan Davis and co.

Taylor continues: “I knew they were working with Nick Raskulinecz and Nick hit me up and was like, ‘Dude, this fuckin’ shit’s going really well. We’ve got this tune, we’re trying to wrap our head around it but it might need you.’

I was like, ‘When do you need me? I’m getting on a plane.’ I literally booked the flight the next day and flew down and did it. I just belted it out and we just kind of went for it. It was cool.”