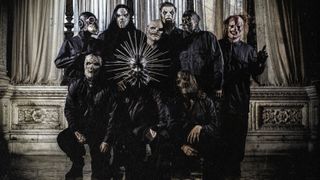 Artists including Bruce Springsteen and Pearl Jam have cancelled shows in North Carolina in recent months, following the state’s HB2 law, which dictates that people must use public bathrooms according to the gender on their birth certificate and not their current identity.

This is seen as discriminatory against the LGBT community and transgender people in particular.

And while Slipknot say they had reservations about playing in North Carolina, they’ve decided to perform to highlight the issue and called upon fans to do their bit to help repeal the bill by teaming up with Equality NC.

The band say in a statement: “When we started this tour, we had reservations about playing in North Carolina because of a law recently passed there called HB2. The law halts the rights of LGBTQ people, doesn’t allow for cities to pass a living wage for the working class.

“We believe that regardless of who you are, or what you believe in this country – and in our own metal community – that everyone should be given access to equal opportunities they need to succeed. This law flies in the face of those values.

“We believe that regardless of who you are, or who you love, you shouldn’t have to face hatred at home or in your community. Our fans in North Carolina deserve better, so we decided not to cancel. We don’t care where you pee – just please flush. It’s pretty simple, really.”

The statement continues: “We’ve decided to partner with Equality NC, the LGBTQ advocacy group leading the fight against this hateful bill. You can talk to Equality NC at our show about how to get involved, and get registered to vote in NC. That way we won’t have to talk about this the next time we come back there.

“We’re coming to North Carolina to show our fans that they can make the difference needed to repeal this law and return their state to a place that welcomes everyone and values differences.”

Slipknot vocalist Corey Taylor recently said that he could have been paralysed after ignoring a long-standing spinal injury.