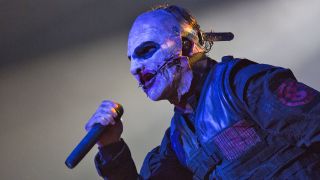 Corey Taylor has recalled the moment his doctor discovered the spinal injury that required emergency treatment – and realised that it could have paralysed him.

And he’s admitted he behaved like a “fucking idiot” by ignoring the symptoms.

The Slipknot frontman had broken his neck without knowing it, and dismissed increasing movement problems as a result of getting older.

He finally underwent surgery in June, although he’s admitted he went back on the road too soon.

Taylor tells Revolver: “I was losing strength on my right side. My balance was screwed. The last two or three years have been weird for me, physically. But you get to a certain point where you think it’s just because you’re getting older.

“My doctor sent me to a specialist, and he was like, ‘We need to do surgery right now.’ Me being me, I was like, ‘Is there any way we can reschedule this for after the tour?’ He’s like, ‘No.’

“He said my spinal cord injury was 20 times worse than what he’s seen with UFC fighters. He pulled up the MRI and goes, ‘You see that? That’s really, really bad – that shouldn’t even be growing like that.’

“I was like, ‘Oh shit. You could have been paralysed, dumbass!’”

He thinks the original injury may have been sustained when he fell off a stage in 1999 and landed on his head. “The funny thing was, I had staples in the top of my head at the time from an earlier accident where I’d walked into a cherry-picker,” he says.

“After I fell off the stage I went to the EMT to have them check on the staples – and not my neck. I was such a fucking idiot it’s just not funny.”