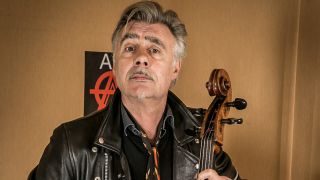 Titled The Anarchy Arias, it was recorded by the Royal Philharmonic Orchestra along with opera singers and sees them perform 13 classical renditions of punk classics including Oh Bondage! Up Yours! by X Ray Spex, Neat Neat Neat by The Damned, No More Heroes by The Stranglers and God Save The Queen by Sex Pistols.

Matlock reveals the album was inspired by his string quartet version of Pistol’s track Pretty Vacant which he recorded in 2015.

He says: “About a year and a half ago I got involved with doing Pretty Vacant with a string quartet. I really enjoyed it.

“The guy behind the Arias heard it, and thought it might be good for all kinds of punk things. So that’s what they did. I then heard some tracks, and I really liked it. I thought some of the orchestrations were fantastic. It was really well done.”

It’s not the first time Sex Pistols tracks have been covered by an orchestra. The London Symphony Orchestra recorded EMI and God Save The Queen for the The Great Rock’N’Roll Swindle soundtrack album.

Matlock adds: “I’ve always liked that version that Jerzimy did on the Swindle soundtrack of Anarchy In The UK, with a French accordion, in waltz time. All those things work, and they’re not necessarily what you think.”

As for The Anarchy Arias, Matlock says: “There’s certainly a lot of tongue in cheekiness to it. At the same time I am of an age where you had things like Deep Purple In Rock, with a symphony orchestra, or Procol Harum doing Conquistador with the Edmonton Symphony Orchestra – or Frank Zappa with the BBC Symphony Orchestra at the Festival Hall.

“And always in the back of your mind, as a songwriter, you wonder what your stuff would sound like with an orchestra. And it’s a little bit of an accolade to hear it done that way. I think any good song can be played in any idiom.”

The Anarchy Arias will be released on June 9. Find the tracklist below, along with a video for Pretty Vacant.

The Sex Pistols' Glen Matlock: the 10 records that made me play bass