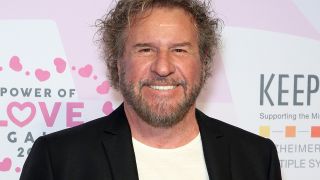 Sammy Hagar says he can “foresee” a Van Halen reunion happening at some point in the future.

There’s been much speculation about the band getting back together, with bassist Michael Anthony saying last summer there had been talk of a Van Halen reunion tour, only for those plans to be scrapped.

Now, Hagar has spoken about the possibility of the group getting together in a new interview with Rolling Stone, where he directly addresses David Lee Roth’s comments from last October, when the singer said: “I think Van Halen’s finished.”

Hagar says: “Until Ed or Alex Van Halen die, they’re not finished. Those are two great musicians that can friggin’ do as good as most people at half-mast. As a drummer and as a guitarist and creative person, Eddie, I can’t see them ever being finished.”

The Red Rocker joined Van Halen following Roth’s departure in the mid 80s and stayed in the lineup until 1996. He rejoined in 2003 for live shows before leaving the band for good in 2005.

Hagar previously said he would only be interested in a reunion tour if Roth and Anthony were involved, and it’s a point he brings up once again in the interview, saying he’d also like to involve Eddie’s son Wolfgang and his son Andrew Hagar in a triple bill format.

Hagar adds: “I foresee it happening. I just know what I know in my heart and my head, which is that it has to happen. Whether it’s Sam and Dave or not, I don’t know that either.

“But I know that Eddie and I are not done. If enough water goes under the bridge before we die, it’ll happen. It has to. God is going to slap us both around if he has to.”

As for the rumours surrounding Eddie Van Halen’s health, Hagar says: “Eddie had a lot of health issues, but I heard he got it together. I pray for the guy and I love the guy.”

Hagar and his band The Circle, which features Anthony, drummer Jason Bonham and guitarist Vic Johnson, have been releasing a series of Lockdown Challenge videos recently, covering some of their favourite songs.