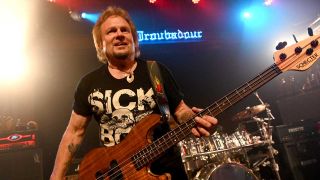 Michael Anthony has confirmed that a rumoured Van Halen reunion tour was due to take place this year – but the plans have been scrapped.

The bassist told Eddie Trunk on SiriusXM’s TrunkNation show that he was approach by Van Halen manager Irving Azoff last October to see if he was interested in rejoining the band for a 2019 tour. Further conversations took place with singer Dave Lee Roth’s business manager.

“From what I’ve heard, and I haven’t spoken to any of the guys, they were gonna try to plan a thing for this summer,” said Anthony, who currently plays alongside former VH singer Sammy Hagar in The Circle. “They never got in touch with us about any kind of a contract or any kind of a meeting to discuss or whatever. And the next thing I knew, the plug got pulled on it.

“The reason the Circle is taking a break right now is that if things would have worked out as they were starting to go and was planned. We would have been in pre-production rehearsals with Van Halen right now.”

Michael Anthony says to @EddieTrunk in regards to a @VanHalen reunion ... that had it worked out, we'd be rehearsing right now ... catch the full interview from Wednesday's show anytime you want via @SIRIUSXM on-demand! @siriusxmvolume #TrunkNation pic.twitter.com/OskYFdpMuoJune 20, 2019

The tour would have marked the first time Anthony would have been onstage with Van Halen since an ill-fated tour with Roth’s successor Sammy Hagar in 2004. Hagar himself recently told Classic Rock that he did not want a Van Halen reunion to happen.

“I’m afraid if I ever reached out and really tried to contact Ed and Al, they would think that I was trying to get back in the band or I was trying to do a reunion,” said the singer. “And I'm not. I am so content with The Circle – we play the Van Halen songs that I wrote with Ed as good as anybody, but I’m happy to have just five or six Van Halen songs in my set. It's almost like I don't want to be asked to do because i'd feel like I had to do it, but I don’t really want to. I'm sorry I don’t.”