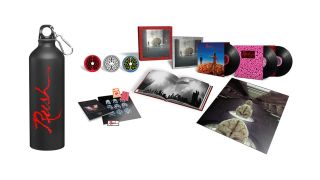 Rush's classic 1978 album Hemispheres is to be given a lick of paint to mark the album's 40th birthday. The new version will be available in three versions of increasingly complexity, as well as in a number of different bundle forms. It will be released on November 16.

“Hemispheres was one of our most challenging and demanding records to make,” says Alex Lifeson. “From its inception in a Wales farmhouse where it was written over a four-week span to the very difficult mixing sessions in two London recording studios, it stands as a key transitional album in Rush’s long recording history.”

The Super Deluxe Edition includes two CDs, one Blu-ray disc, and three 180-gram black vinyl LPs. The set includes the Abbey Road remastered edition of the album on CD for the first time, along with previously unreleased and newly restored bonus audio from the band’s 1979 Pinkpop Festival performance in the Netherlands. The third bonus disc contains a 5:1 surround sound mix of the album on Blu-ray disc, plus four bonus videos: three shot in 1978 as promo videos, and one for La Villa Strangiato, originally shot at Pinkpop.

The regular Deluxe Edition features a shorter version of the essay and the replica programme, while the vinyl edition comes with the shorter essay, the programme, and a 5x5-inch digital download card sticker of Syme’s new artwork.

There are  also bundle packages available which include a Rush water bottle, a notebook, a t-shirt, and a phial of Neil Peart's sweat. That last one isn't true.

The bundles are available to pre-order from the Rush store.

The band have previously released anniversary editions of A Farewell To Kings and 2112.