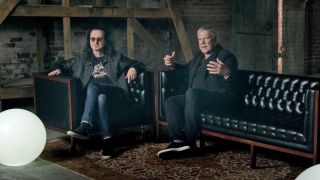 Rush’s Geddy Lee and Alex Lifeson have shared memories of what life was like while on the road with Kiss in the 70s.

The video is taken from their Time Stand Still documentary, which will be screened across the US for one-night-only on November 3.

In the clip, the pair recall hotel hijinks, which saw guitarist Lifeson dress up as ‘The Bag’ and entertain some members of Kiss, including Ace Frehley, while on tour together in the mid-70s.

Lifeson says: “The Bag would just pop up every once in a while – it was just a face drawn on a paper laundry bag. I’d make two holes for eyes and draw a stupid face on it, wear sweat pants and stick my arms through the sweat pants, so only my hands came out at the knee.”

The pair say The Bag usually ended up in Kiss guitarist Ace Frehley’s room – something which irked Gene Simmons which “made Ace even happier.”

Lee adds: “Gene was straight and wasn’t high like we were, so he had a different sense of reality when he came into Ace’s room. We were drinking, smoking and generally being idiots.

“Gene came in one time and there were these two girls looking at the bag wondering, ‘Who’s that guy?’ One of them went over and tried to remove it – that was cause for immediate ejection from the hotel room, so I threw them out.

“Gene was very upset about that because the only reason he was in the room was there were two girls there.”

Time Stand Still was shot during the band’s R40 tour last year – widely thought to have been the last large-scale road trip of their career.

Cinema tickets go on sale on October 7. Find out more via the Fathom Events website.