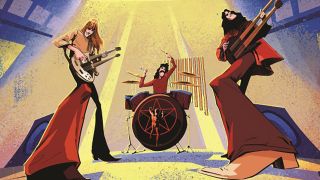 A graphic novel based on how Rush created A Farewell To Kings is to be released later this year.

The publication is officially licensed and will launch on September 10 via Fantoons and is available to pre-order via the band’s website – including a version that comes with a reproduction of the 1978 tourbook.

The Making Of A Farewell To Kings: The Graphic Novel is spread across 144 pages and will be presented in hardback format and measures 12 x 12 inches.

A statement on the book reads: “This epic, fully authorised graphic novel chronicles the birth of Rush’s classic album A Farewell To Kings.

“Relive the trials and triumphs alongside Alex Lifeson, Geddy Lee, and Neil Peart as they create the masterpiece of progressive rock that gave birth to Closer To The Heart and the majestic Xanadu.

“The book features artwork and storytelling from Fantoons, with new input from Alex Lifeson and producer Terry Brown.

Check out some of the pages from the graphic novel below.

A reissue of A Farewell To Kings was released back in 2017 to mark its 40th anniversary.

Meanwhile, a book charting the history of Rush’s live history titled Wandering The Face Of The Earth will be published on October 15, while Time Machine 2011: Live In Cleveland will be released on vinyl for the first time on June 7.

Rush: Time Machine 2011 Live In Cleveland
Rush's live package will be released on vinyl for the very first time this summer. The live run saw the trio playing their classic 1981 album Moving Pictures in full.View Deal