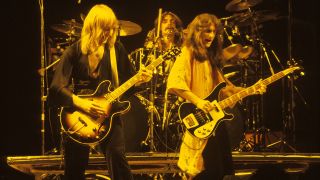 A new book documenting Rush’s touring career is to be published later this year.

Rush: Wandering The Face Of The Earth - The Official Touring History was compiled by Skip Daly and Eric Hansen and has been fully endorsed by the band.

The 416-page book will include every setlist, along with the bands who joined them on the road, while previously unpublished photographs will also be included.

It’ll be published on October 15 via Insight Editions, with Primus’ Les Claypool – who toured with Rush on their Roll The Bones tour in the early 90s – providing the foreword, while Stewart Copeland has written the afterword.

“Wandering The Face Of The Earth covers Rush’s storied touring career, from their humble beginnings as a Toronto-area bar band playing middle school gymnasiums, to their rise as one of the world’s most sought-after live acts, selling out massive arenas around the globe.

“This book includes every setlist, every opening act, and every noteworthy moment meticulously researched and vetted by the band themselves. Along with spectacular, never-before-seen imagery, this is the must-have tour compendium for Rush fans.”

Rush played their final show together in Los Angeles on August 1, 2015 – the last show on their celebrated R40 tour.