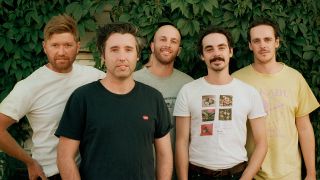 It’s the third track taken from the band’s upcoming album Sideways To New Italy, which is set to arrive on June 5 through Sub Pop.

Speaking about the new track, vocalist and guitarist Tom Russo says: “It's about pushing on through the relentless march of time, against the constant cycle of seasons. And the way people change and relationships change.

"It’s set in that time when autumn is turning into winter and the trees are getting bare."

As for the video, he says: "Our friend Jamieson Moore shot the footage of Sicily, Sardinia and the Aeolian Islands on her phone while on vacation last year. The Aeolian Islands is also where my and Joe Russo's ancestors are from.

"We were also planning to shoot the band playing in Eolian Hall in Melbourne (it’s a community hall founded by Aeolian immigrants). We got some practice footage but by the time it came to shoot the band, we were on lockdown. So it’s turned out as a kind of a love letter to a particular place."

Rolling Blackouts Coastal Fever: Sideways To New Italy
1. The Second Of The First
2. Falling Thunder
3. She's There
4. Beautiful Steven
5. The Only One
6. Cars In Space
7. Cameo
8. Not Tonight
9. Sunglasses At The Wedding
10. The Cool Change