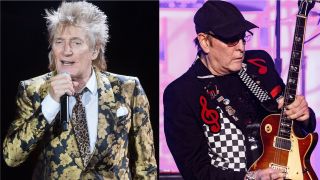 Rod Stewart will tour across North America this summer with Cheap Trick in support.

The news has been confirmed by Rolling Stone, who say that the run of shows will get under way at the Blossom Music Center in Cuyahoga Falls on July 21 and wrap up at Tinley Park’s Hollywood Casino Amphitheatre on September 5.

Tickets will go on sale later this week through Stewart’s website and via Cheap Trick’s site.

News of the tour comes with Stewart facing a misdemeanour count of simple battery after allegedly hitting a security guard at a new year party in Florida.

Although Stewart wasn’t arrested on New Year’s Eve, both he and his son Sean have been ordered to appear at the Palm Beach County Criminal Justice Complex in early February.

In September last year, Stewart revealed he had been diagnosed with prostate cancer in 2017, and revealed the news at a benefit show for the Prostate Project and European Tour Foundation with Ronnie Wood and Kenney Jones in the UK.

He told the crowd at the Wentworth Club in Surrey: “Two years ago I was diagnosed with prostate cancer. No one knows this, but I thought this was about time I told everybody.

“I’m in the clear now, simply because I caught it early."