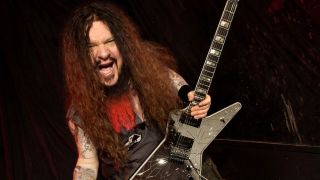 Members of iconic rock bands including Pantera, Slayer and Alice In Chains are to perform at the Monster Energy Ride For Dime Dimebash 2016 on January 22.

The tribute concert in honour ‘Dimebag’ Darrell Abbott will raise money for the Ronnie James Dio Stand Up and Shout Cancer Fund.

Members of Pantera, Slayer, Alice In Chains, Machine Head and many more will perform at Lucky Strike Live in Hollywood, California, in memory of the former Pantera guitarist.

Dimebag was shot on stage during a Damageplan concert in Columbus, Ohio, in 2004.

The Stand Up And Shout Cancer Fund is an organisation which funds cancer research, cancer screenings and offers support to families affected by the disease. It was founded in honour of the late Rainbow and Black Sabbath singer who died in 2010.

Abbott’s long-term girlfriend, Rita Haney, says: ”I think the thing that embodies this event and entity is unity – bringing everyone together to celebrate the music played and loved by Darrell and to benefit the foundation of a very beloved man, Mr Ronnie James Dio.

“Dimebag Darrell was notorious for giving us all so much, in some way, even to this day. So to be able to give back in his name is such an honour. With all of this amazing talent in one place it makes for a damn good celebration, so come on out.”