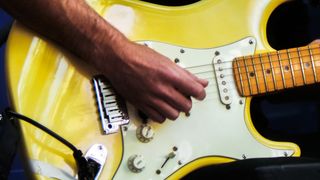 New figures published by Nielsen Music show that rock is no longer the most popular music genre in the US.

Forbes report that they examined which songs and albums are performing the best throughout the first six months of the year – and they’ve discovered that hip-hop/R&B is responsible for 25.1% of all music consumption in the US, with rock slipping to 23%.

It’s the first time that rock music has fallen from the top spot since Nielsen began examining music trends across the country in 1991.

However, rock is the winner when it comes to album sales, with the genre scooping 40% of the market. But that figure comes with a caveat in that the total number of albums bought each year is falling, so the figure is not fully representative of how people consume music.

Nielsen’s research shows that hip-hop/R&B is almost as popular as rock and pop music combined, with 29% of all streams on services such as Spotify and Apple Music featuring hip-hop/R&B artists.

Last year, a study carried out by Business Insider found that young Americans paid more for music than their parents, which appeared to challenge the perception that young people tend not to pay for music.

Value of vinyl sales overtakes digital downloads in the UK