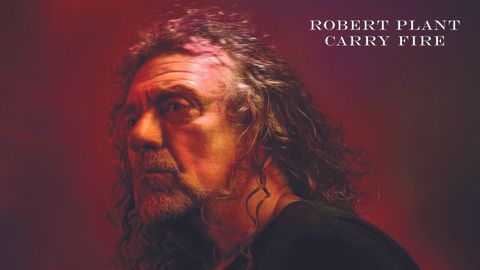 Maybe it’s the times we live in, with the knowledge and diverse resources available to musicians, but despite the parlous state of the industry, for veterans with more than a scintilla of curiosity, age is not necessarily a process of inevitable artistic deterioration. Robert Plant has just turned 69 and there’s a distinctly melancholic, late autumnal feel to some of the lyrics on Carry Fire. However, in its intricate, hybrid weave of folk, rock, North African rhythms and stylings, and even discreetfibres of electronica, this album represents a higher creative point than, say, his somewhat poodle-haired solo work of the early 1980s.

Their interplay is evident immediately on The May Queen, in which Moog synth drones, Arabic percussion, russet hints of folk and a palpable boogie pulse mix naturally, evoking a sense of a mature and distilled contemporary blend rather than the tired, dated feel that hampers the releases of other eminent 60-somethings.

Most noticeable is Plant’s voice. It may be that he simply can’t scale the vocal heights of his youth. It’s commendable, however, that he doesn’t merely attempt to recycle the 70s Plant tricks and tropes as a mere exercise in preserving the Robert Plant Brand. His voice has developed into something quite different with age: smoky, intimate, delicate, hankering, with none of the epic, blues-orientated screeching that was once his stock-in-trade.

It’s an approach that suits the likes of Season’s Song, one of a number that seem to speak of an old romantic increasingly aware of his own mortality: ‘My senses have escaped me/My mind is on the run.’ The arrangement patters discreetly like snow on a window pane.

Still, there’s life in the old dog. New World… is announced by a heavy, billowing guitar intro, crashing onto a ‘virgin shore’. The allusion to ‘immigrant’ is one of a few fragmentary Zeppelin references that blow back on the winds of these songs, adding to a sense of Plant as a figure etched and weathered by great adventures from long ago, unsure how many lie ahead of him. Dance With You Tonight dramatically exacerbates that sense, haunted by the backward taping on the soundtrack.

This, however, is an album rooted in the present day. Carving Up The World Again …A Wall And Not A Fence feels explicitly geopolitical, with its Native American-style drum beats. Guitars breaking over the horizon are a reminder that this album isn’t entirely an exercise in contemporary fusion. Rock courses through it, as is further evident on the rumbling Bones Of Saints, and Plant’s defiant refrain of ‘No, no, no!’

That said, Plant shows a great grasp of modern atmospheres on A Way With Words, as if such an understanding comes with experience. There’s the evocation of evening clouds drifting, night insects gathering in the warm dusk, memories rearing – the unique emotional intensity of late middle age. The title track, meanwhile, is practically a sonic transcription of a Marrakesh that’s still bustling at sunset, traditional instruments plucked beneath starry skies of synth.

There’s a sole cover version – Ersel Hickey’s Bluebirds Over The Mountain – which is given a revved-up treatment, with a sawn-off riff and percussive drive fit to rattle the remains of John Bonham. Chrissie Hynde provides guest vocals, and it’s a sign of something or other that in 2017 their vocals actually sound more similar than you might expect, as if to suggest that everyone eventually arrives in the same place.

That is a somewhat romantic idea – rock has its fair share of stragglers and casualties. But as for Plant, the truth is that Carry Fire is about as good an album as we could reasonably expect from him in 2017.