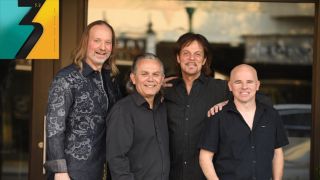 Berry, who featured in ELP offshoot 3 with Keith Emerson and Carl Palmer in 1988, revisited the project last year for 3.2, in which he completed musical ideas he'd previously been working on with Emerson before his untimely death in 2016, releasing The Rules Have Changed.

Now with live US dates being arranged, Berry has finalised the live line-up, with singer and guitarist Paul Keller making up the quartet.

"For the upcoming tour, we'll be performing not only music from the new 3.2 album, but also music from the first 3 album, and a few hits from my back Magna Carta catalog - some songs from YES, ELP, Genesis, Jethro Tull, etc..." Berry tells Prog.

“In addition to all the great music, you'll also experience first storytelling, performances, and insights from my work with Steve Howe, GTR, Ambrosia, Keith and Carl, and more. It's a presentation of my legacy of progressive rock from the past 30 years. We hope to see you in the audience and meet you in person after the show!”

US tour dates are being finalised at the time of writing, including an appearance at ProgStock festival in October. There is currently no news on whether there will be any UK or European dates.