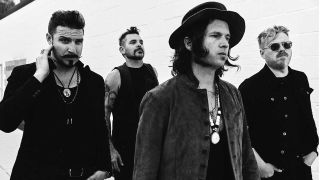 Rival Sons have today announced plans to play five shows in the UK later this year.

The Californian outfit will visit Liverpool, London, Nottingham, Edinburgh and Bristol in November, while The Record Company will support on all dates.

Jay Buchanan, Scott Holiday, Mike Miley and Dave Beste will play in support of their most recent album Feral Roots, which was released in January this year.

Speaking about the follow-up to 2016’s Hollow Bones, vocalist Jay Buchanan told Guitar.com: “Each one of these songs becomes a personal mantra for us. When you’ve had to repeat a song every goddamn night, when you next go in to record you think, ‘Write things that you are going to want to do every night!’

“Because if you write a bunch of negative shit, you’re going to be singing negative shit. Write about things that are going to make you feel good and that you can stand behind.”

Tickets for all five concerts will go on general sale on June 13 from 10am.

Before their return to the UK, Rival Sons will tour across the US with Stone Temple Pilots.

Rival Sons: Feral Roots
Rival Sons return with Feral Roots – the follow-up to 2016's Hollow Bones. The new record features the tracks Do Your Worst, Back In The Woods and Look Away.View Deal