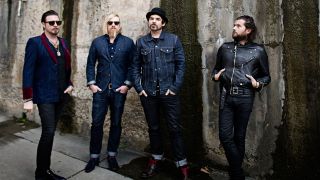 Long Beach four-piece Rival Sons have royally smashed 2016 out of the park. Not only were they invited to be the sole opener for every show on Black Sabbath’s The End tour, they also released the superb Hollow Bones.

“This has been a tremendous year,” vocalist Jay Buchanan reflects. “Going out with Sabbath has been a huge opportunity and a fantastic experience. We have been so busy touring that when the record dropped it seemed like: ‘Oh yeah, and we’ve released a record as well.’ Usually everything gets hyped up, but with this record we believed in it and loved the songs so much that it was more of a case of: ‘Alright, there goes another one off to college and now we go back to work.’”

While the band’s insane workload meant they had no time to dwell on the masterpiece they had created, we’ve had the pleasure of digesting this record ever since its release this summer. It’s an album that finds Buchanan at his most lyrically introspective as his bandmates weave a rich array of sounds around him. There’s the Sons’ trademark fuzzy, thick-grooved big rock, but also stripped-back soul and haunting melodies. Impressively, it was written and recorded in just a month. The singer has an idea why they were able to pull such a barnstormer out of the hat: good old-fashioned talent.

“I think Rival Sons is an absolutely incredible band,” he says. “And that doesn’t have anything to do with my part in it, I mean the guys I am playing with. Each one of those guys is an absolute killer, they’re hit-men.”

Still, don’t mistake this confidence for arrogance; the group refuse to rest on their laurels. Instead Buchanan says they’re happy to keep risking their necks in the Big Top.

“Each time you make a record it’s like going to the circus where the main attraction is a guy sticking his head into a lion’s mouth and tonight could be the night that you watch his head get crushed. Each time we go up on the wire and make an album, we have to prove that we deserve it, because there’s so many bands that never get to make a record.”

We’re unsure how his 2017 could possibly top 2016, but Buchanan remains confident.

“You know what? This has been a great year,” he says. “But you can always do better. If you ask for more, sometimes it will come to you.”