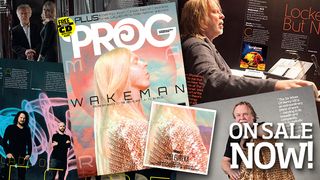 It's Rick Wakeman on the front cover of the new issue of Prog, on sale today.

Rick discusses his upcoming album, the very proggy The Red Planet, how life has been treating him during lockdown and what really happened with Jon Anderson, Trevor Rabin and him in ARW. Plus. Rick claims his new album is 'Prog. With a capital P' (he's not wrong either!) so we've trawled through his impressive back catalogue - there's enough albums - to pick out the real prog rock gems.

Before we divulge what's in the rest of the issue, some information on how best to get a hold of your copy of Prog during the current Covid-19 crisis.

* Prog is on sale in the UK in shops that remain open such as supermarkets and newsagents. As of Monday June 15 most shops will be open in the UK (with social distancing), so you should have far more options on the high street.

* The easiest option for everyone would be to go digital. You can subscribe digitally from just £1.78 an issue. And also from the Apple Store, from Zinio and all manner of digital magazine retailers.

* Single print issues of Prog can be purchased online from MyFavouriteMagazines and also Burning Shed. MFM will be holding more stock than usual.

* Subscriptions. Please note that we are not accepting new orders on print and bundle subscriptions outside of the UK due to Covid-19 logistical issues. We hope to be able to offer this again soon. Please check for details. Single issue magazine orders are not affected by this. UK subscriptions available here.

The postal services in the UK is working, although still affected by some inevitable delays in some areas. Please be patient.

Haken - the Uk prog metallers tell us all about new album Virus; the story of The Cockroach King

Fairport Convention - founding member Simon Nicoll look back at a career stretching over 50 years of melding folk, rock and prog and more

Prog's Most Influential Albums - not the greatest prog albums of all time maybe, but cedrtainly the ones that have had the most impact

Martin Grech - 18 years ago he exploded on the scene as a teenager. Now the mercurial musician is back with another stunning collection of sounds

And music from Chimpan A, Lazertuth, Gandalf's Fist, Suns Of The Tundra, Last Flight To Pluto and more on the free CD.