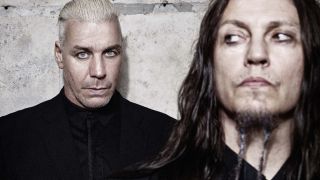 Rammstein will begin work on their seventh album in September, according to Peter Tagtgren.

The Pain and Hypocrisy mainman has been working with the band’s Till Lindemann on their Lindemann side-project and will release their debut Skills In Pills on June 23 via Warner Bros.

And despite Rammstein guitarist Richard Kruspe recently saying that the band would reconvene in a year to decide their future and that there was “no plan for an album” it seems as if that’s changed – although the material might not be ready until 2017.

Tagtgren tells Bloody Disgusting: “Till is going to go back to Rammstein in September to begin pre-production stuff and he says that it usually takes two years from when they start until the album is done.”

Tagtgren also reveals that Lindemann are already working on their second album – even before their debut’s been released.

He continues: “We’re rolling already. We were already writing stupid lyrics when we were drunk and shit. We’re going at it. We’re going to go as long as we have inspiration.

“Maybe it stops at five songs but at least we have half an album done. It’s just so easy to write music together. No pressure. We do it because we can.”

He reports the pair could play live dates together – but only if people like their debut offering. Tagtgren continues: “We’re pretty scared of how people are going to take this so we really need some response from fans to see. As soon as we open up that can, we’re going to go insane with that shit.

“If there’s not really a demand for it, maybe we’ll do a few showcases. But it won’t be full tours. It’s up to the people to decide if we go out or not.”

The pair released a promo for Praise Abort last month and issued a teaser clip featuring all the tracks on Skills In Pills ahead of its launch.

Lindemann are featured in the current edition of Metal Hammer – on sale now in print, digital and vid TeamRock+.