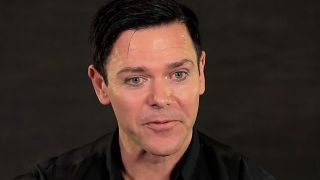 Rammstein guitarist Richard Kruspe says the band will only return when they have an artistic vision they want to explore – and that moment is at least another year away.

They met in late 2014 for an annual discussion but agreed to remain on hiatus and compare notes again towards the end of 2015.

Meanwhile, he’s concentrating on side-project Emigrate, while Rammstein vocalist Till Lindemann – who last year said he wasn’t certain the German giants would regroup – focuses on his self-titled duo.

Kruspe tells Loudwire: “We meet always once a year and talk about things. We decided to postpone for another year. Next year in September we’ll meet again.

And he argues the advantages of the arrangement: “We don’t have pressure to do certain things when there’s no vision. I think it’s a problem that sometimes you have to do records to promote a tour without a vision.”

Kruspe believes there’s too much of that about in the modern world. “Quantity comes along and the quality sucks at the moment. So I like the position – Rammstein do not have to do a record but we can still headline at some festivals. It’s a privileged situation.”