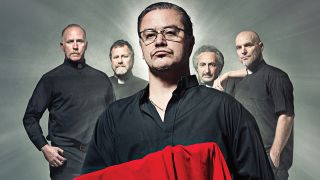 Having just released one of the albums of the year in Sol Invictus, Faith No More now return to the pages and cover of Metal Hammer magazine to talk about the new album, their reunion shows and the new attitude that leaves their confrontational past behind.

We dig deep into the band’s past and psyche and look into FNM’s infamous crazy ideas, their pioneering attitude and the early days with “transgender hookers, sex workers and crystal meth”.

And you have to agree that it looks pretty fucking good – LOOK! (shout out to Ross Halfin)

We catch up with the God Of Fuck to investigate his transformation from the most shocking man on the planet to mainstream icon to the toast of Hollywood. Luckily he assures that he still wants to cause a bit of trouble…

We celebrate 30 years of Megadeth’s debut Killing Is My Business and sit down with Dave Mustaine to get the inside story on the formative years of a band seeking revenge who thrashed their own way.

The new partiers on the block, Wilson, have gone from underground heroes to one of metal’s hottest hellraisers in just under two years. But how did they go from crowds of 250 to 3000 in such a short time? We step inside the party that you’re all invited to.

Rammstein’s mainman Till Lindemann spills the beans on his new eponymous band with Peter Tägtgren. Saying “it’s better when it’s pure energy. No pyro, leave that bullshit behind” we reveal all about the most obscene side-project in metal.

And a FREE Download Underground CD featuring 13 of the most exciting new bands at this year’s Download festival.

Plus TWO big-ass posters from Slayer and Mastodon to plaster your walls with. What more could you possibly want?

Order your copy of Metal Hammer issue 271 here. Or download it from the Apple Store. Or read it on TeamRock+.