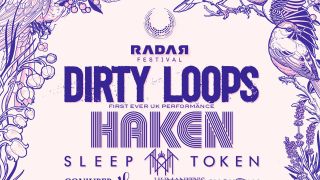 Radar Festival has cancelled plans to hold the event in 2020 and moved this year's event to 2021. The new dates will be 30th and 31st July 2021, two years on from the highly successful inaugural edition. The festival have also released a trailer video, which you can watch below.

The festival has also launched a crowdfunder to support both the festival and their crew.

The majority of the already announced line-up will move over to this new date, including headliners Halen and Sweden's Dirty Loops, who will be making their UK debut, Sleep Token, Jakub Zyteki, The Physics House Band and more.  A new main support band will be announced very shortly.

"I’m not sure it will come as a huge surprise that in light of the current global situation we are postponing Radar Festival 2020, but we held on as long as we could, whilst constantly evaluating the ever evolving situation," the organisers say in a statement. The UK Government is pushing steadily to re-open the country, but we just did not feel it was safe to put our event on.

"Gigs should be packed, in sweaty rooms, people jumping up and down losing their minds to their favourite bands and as it stands we would probably have to seriously reduce our capacity and re-book without any international acts.

"However, looking forward with positivity to 2021, we have launched a crowdfunder - where we will be giving 20% of funds raised to our 2019 crew - with many great rewards (and some to be added!) and we have managed to retain 95% of our lineup with two to be added at a later date.

Details of the crowdfunder ti support the festival and its crew can be found here.