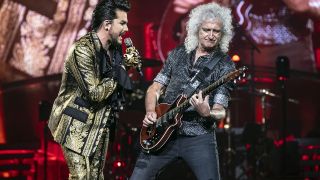 Queen and Adam Lambert have announced that they’ll bring their Rhapsody tour to the UK and Europe in 2020.

They’ve lined up a total of 16 shows which will get under way in Bologna, Italy, on May 24 and conclude with a performance in Copenhagen, Denmark, on July 1.

Included in the run is a five-night residency at London’s O2 between June 2 and June 9.

The news comes after Queen and Adam Lambert wrapped up the North American leg of the tour last month – a run of shows that saw them perform in front of close to 400,000 fans.

A statement on Brian May’s website reads: “The all-new Rhapsody show, already hailed as ‘a marvel of technical advances,’ will kick off the New Year of 2020 with 17 giant arena and stadium shows across South Korea, Japan, Australia and New Zealand.

“The extravaganza will then arrive in the UK and Europe in late Spring, as Queen original band members Brian May and Roger Taylor team up once more with longtime frontman Adam Lambert on lead vocals to perform 16 shows across eight countries from late May into early July.”

Tickets for there shows are now on sale, with a limit of six tickets per booking.

Queen will headline this coming Saturday’s Global Citizen Festival in New York’s Central Park, which has been organised once again by the Global Poverty Project, which aims to end extreme poverty by 2030.