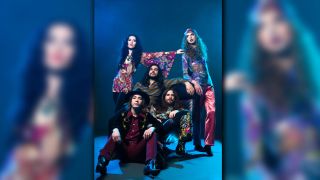 Purson have announced that their second album Desire’s Magic Theatre has been pushed back until April 29.

The follow-up to 2013 debut The Circle And The Blue Door was due to launch on March 23. But that’s changed due to “exciting tour developments in the US – all of which will be revealed in good time…”

Purson released Electric Landlady – the first track from the album – last year and will hit the road across the UK in March and April. The tour dates will not change despite the album’s new release date.

Frontwoman Rosalie Cunningham says: “Desire’s Magic Theatre has turned out to be everything I’d imagined and more.

“My world has been so consumed by it that I’ve barely been able to reflect on what it has become: a technicolour variety show, a playful display of the musical whims only briefly hinted at in our previous work – a psychedelic rock opera dedicated to our good friends Sarge Pepper and Zig Stardust.”