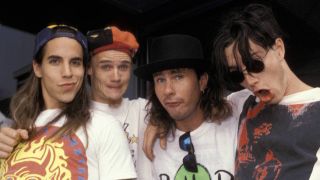 It’s more than 25 years since the Red Hot Chili Peppers and Faith No More brought funk rock crashing into the mainstream consciousness. But the late 80s and early 90s actually was the genre’s second great era.

In the early 70s, rock and funk co-existed happily. Inspired by Stevie Wonder and Funkadelic, the likes of Led Zeppelin, the Rolling Stones and even Deep Purple began to display their funkier influences on their sleeves.

It’s not just been one-way traffic. For every white rock band getting ‘deep in the pocket’, there was a Mother’s Finest or Living Colour – black artists who broke down the artificial barriers that had been gradually erected. All of those bands and more are in this definitive list of the 20 greatest funk rock songs ever.

In 1980, Billy Squier had a song that gave a name to his style of crunchy, rhythm-driven hard rock: The Big Beat. A year later he delivered his masterpiece, The Stroke. Like The Big Beat, only bigger, it has drums that crack like a whip, sly guitar licks punctuated by staccato power chords, and Squier coolly dissing the music business.

When Zeppelin got funky on The Crunge in 1973 it was all very tongue-in-cheek. In stark contrast, Trampled Under Foot, from Physical Graffiti, was no mere throwaway. Powered by John Paul Jones’s clavinet riff, inspired by Stevie Wonder’s Superstition, it’s a genuine Zeppelin classic.

One of the great funk groups to emerge in the 80s, The Time co-starred in the film Purple Rain and much of their material was written by Prince. But on their 1991 comeback album Pandemonium, these suave dudes proved they could also rock out, combining slamming funk and heavy metal histrionics on Skillet, with guitarist Jesse Johnson pulling up trees.

There had been black rock stars before them, but when Living Colour’s debut album Vivid arrived in 1988, the notion of four black guys playing heavy rock was still viewed as revolutionary. On a more simplistic level, Vivid is just a great record, and Open Letter (To A Landlord) is its standout: a soulful protest song with a power-funk groove.

Derringer was a guitar-playing sidekick to bluesman Johnny Winter when he wrote Rock And Roll, Hoochie Koo, the powerhouse funk rock song that became his calling card. He cut it first with Winter, but the definitive version is on Derringer’s 1973 solo debut All American Boy, the lyrics – ‘Lawdy, mama, light my fuse’ – pretty fly for a white guy.

With its thwacking drums and bass and heavy guitars, Faith No More’s debut single, released in 1988, is funk metal with added punk sensibilities – both in the raw, untutored vocals of Chuck Mosley, the manic singer later replaced by Mike Patton, and in its gloatingly non-PC lyrics. A groundbreaking alternative rock song, We Care A Lot still sounds electrifying.

Glenn Hughes is one of the great white soul singers – like Michael McDonald with a rocket up his ass. Before he joined Deep Purple, Hughes was the bass-playing frontman of power trio Trapeze. Way Back To The Bone, from their 1972 album You Are The Music… We’re Just The Band, is a heavy-rolling, James Brown-style shakedown.

They did disco, to brilliant effect, on their 1978 hit Miss You. But four years earlier, in a golden era when funk was dominant in black music, that’s what the Stones dug into on Fingerprint File – the final track on It’s Only Rock ’N Roll – with a tension generated by Keith’s razor-sharp riff and Mick’s paranoid jive talk.

Bowie’s first US No.1 single, Fame originated from an impromptu collaboration with, ironically, somebody even more famous than himself. When John Lennon met Bowie in New York in 1975, they wrote and recorded Fame in a day. Based on a slinky riff by Bowie’s guitarist Carlos Alomar, with Lennon on whacked-out backing vocals, it’s as freaky as it is funky.

The last hit that Tina Turner made with husband Ike before she ditched him, Nutbush City Limits is the greatest song they wrote together – and she sang the hell out of it. Named after her Tennessee home town, it’s a kick-ass R&B number powered by a stinging guitar riff. When Brian Johnson auditioned for AC/DC, they jammed on this song.

The influence of soul boy bassist/vocalist Glenn Hughes on Purple’s Burn and Stormbringer albums prompted Ritchie Blackmore to quit, muttering about “shoeshine music”. And with Blackmore gone, they could really get their groove on. Gettin’ Tighter – from Purple’s undervalued 1975 album Come Taste The Band – had Hughes channelling Stevie Wonder, with new guitarist Tommy Bolin right on the money.

On their 1988 album Truth Or Soul, LA’s Fishbone added a harder rock edge to their free-for-all mix of reggae, ska and punk-funk. This new sound was showcased on a supercharged version of Freddie’s Dead, a key song from Curtis Mayfield’s 1972 blaxploitation movie soundtrack Super Fly. And while the band plays hard, Angelo Moore sings it with real soul.

When the Dan Reed Network’s debut album was released in 1987, their record label Mercury hyped them as “Bon Jovi meets Prince”. Amazingly, they lived up to that billing. A multi-ethnic group from Portland, Oregon led by poster boy Reed, the Network mixed high-end funk with stadium rock hooks and muscle – as illustrated by Get To You, their brilliant, definitive first single.

5. Lenny Kravitz – Always On The Run

It started off as a Guns N’ Roses song. Written by Slash, it was shelved when drummer Steven Adler couldn’t nail the groove. But Slash’s buddy Lenny Kravitz knew how to make it work. Rewritten as Always On The Run for Kravitz’s 1991 album Mama Said, it swings like New Orleans funk titans The Meters, with Slash adding a mean solo.

George Clinton was the boss of Funkadelic and its sister group Parliament, but Maggot Brain – the epic, 10-minute title track from Funkadelic’s 1971 album – was all about guitarist Eddie Hazel. Instructed by Clinton to “play like your momma just died”, Hazel delivered a sublime, emotionally charged extended solo comparable to Hendrix at his peak. Not funk rock in the traditional sense, but the perfect example of those two worlds coming together.

“The song was very controversial,” said Mother’s Finest bassist Jerry ‘Wyzard’ Seay. No shit. This multi-racial group from Atlanta, Georgia delivered an almighty ‘fuck you’ with Niggizz Can’t Sang Rock & Roll, a righteous, heavy-hitting track from their self-titled album from 1976. The missing link between Sly & The Family Stone and Led Zeppelin, this is the definitive funk rock band.

2. Red Hot Chili Peppers – Give It Away

With their 1985 album Freaky Styley produced by funk master George Clinton, the Chili Peppers had credibility before they had success. But with 1991’s Blood Sugar Sex Magik they had both. Give It Away, a metallic funk juggernaut propelled by Flea’s elastic bass riff, was the album’s flagship single. Superstardom followed quickly.

Not only did Prince rival Michael Jackson when Jacko was at his peak, he did so while looking and playing guitar like the bastard son of Jimi Hendrix. Prince’s Purple Rain album topped the US chart for five months in 1984, and Let’s Go Crazy is its explosive opening track. It begins with a sermon, and ends with a cataclysmic guitar solo. There’s been nothing like it – or him – before or since.