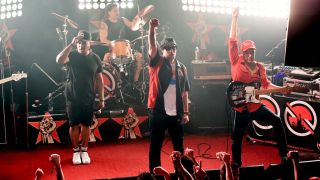 Prophets Of Rage during their first show (Image credit: Getty)

Rage Against The Machine bassist Tim Commerford says offshoot band Prophets Of Rage will “kick the establishment in the fucking mouth.”

He and his colleagues have outlined their mission statement ahead of their second concert, which takes place tonight (June 3) at The Hollywood Palladium, Los Angeles, following their debut in the same city on May 31.

Morello says: “Justice needs a fist and a face. In America’s greatest hour of need the Prophets Of Rage have come together. It’s bigger than us.

Chuck D adds: “Somebody’s got to say something. Social media’s not enough – there’s always the strength of music.”

The band unveiled new song The Party’s Over at their first show, and it’s believed to be about US presidential hopeful Donald Trump B-Real says: “What’s our message for Trump? ‘Get the fuck out of here.’”

Prophets Of Rage will reveal more details of their plans next week.