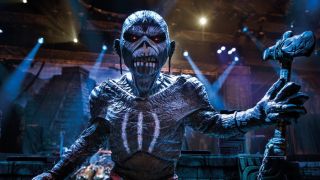 As Iron Maiden prepare to conquer Download yet again, it’s time to speculate wildly about exactly how visually monstrous their headlining set will be. Even at their most restrained, Maiden have always been a musical and visual spectacle and, as any diehard fan will tell you, their best stage sets are simply in a league of their own. There ain’t no party like a Maiden party, is there?

Mainly notable for the debut appearance of “giant” Eddie, a huge recreation of the futuristic figure on the cover of Maiden’s Visions Of The Beast DVD that appeared to torment Janick Gers during the band’s titular anthem, this tour featured a “wraparound” stage and artwork from numerous previous Maiden albums. Past, present, future, all covered. Worst tour name ever, mind you.

You’re not just watching the greatest heavy metal band of all time. You’re in A BLOODY SPACE SHIP. Maiden had done science fiction before, of course, but advances in technology combined with deranged levels of confidence meant that The Final Frontier experience was an eye-popping spectacular to fit the ambition of the album itself.

Neither one of Maiden’s stronger records nor a particularly salubrious period for the band in general as the ropey YouTube footage of the tour proves, the Virtual XI era did at least see them eschew the stripped down, back-to-basic approach of the early-to-mid ‘90s in favour of another eyeball-shattering visual tour-de-force. We’re still not sure about this incarnation of Eddie, though. Big ears, small head… bit weird, really.

Maiden’s darkest album demanded a visually startling stage set and while some fans may have flinched at the prospect of hearing a brand new album in full, being hurled into the dusty shadows and bleak horror of a First World War trench brought unfamiliar songs vividly to life. War… what is it good for? Stage sets for metal bands. Just FYI.

As much as everyone loves a big budget stage show, many fans retain a soft spot for the well-intended, DIY crapness of bands’ early attempts to wow their (hopefully) growing audience. Back in the late ‘70s, the very first Eddie that Maiden unleashed on the public was a papier-mâché mask which squirted fake blood with the help of a fish tank pump. Frankly, what’s not to love about that?

Weird, floating mutant figures and a torso-only, hovering Eddie, replete with a seemingly remorseless wall of fire and retina-wrenching lights, the Seventh Son set was fully in keeping with the album’s grandiose/flimsy (delete according to taste!) conceptual core. Recreated in 2012 to great effect, it was a magical triumph for unapologetic heavy metal ambition.

Newly crowned as heavy metal’s hottest property, Maiden didn’t exactly break new ground during their first bona fide tour as cocksure headliners. What they did was provide future generations with the most iconic configuration of lights, podiums and long-haired musicians imaginable. Immortalised in the video for The Number Of The Beast, this stage set remains the coolest thing that’s ever happened.

A cult favourite from a tour that has never been given a proper DVD release, the Somewhere On Tour set was a dazzling recreation of the incredibly detailed, futuristic Somewhere In Time artwork. Eddie had morphed into some kind of malevolent cyborg with the added bonus of giant hands that appeared from the edge of the stage. Eddie literally had Bruce in the palm of his hand. Not funny, but true.

With faint echoes of the World Slavery tour, Maiden’s current stage set up once again taps into the spooky mysteries of the ancient world, with a giant Mayan Eddie looming over proceedings looking angrier and scarier than ever. The only downside is that the absence of Empire Of The Clouds in the set list means no giant inflatable airship. Boo.

A no-brainer, of course, but it’s always worth stating that the World Slavery Tour was Maiden’s first lap of honour, as their status as the world’s favourite metal band was cemented, arguably for all time. The Egyptian grandeur of the Powerslave artwork was lovingly recreated, with extra lights, fire and assorted theatrical trimmings, and history was made.

Every Iron Maiden album – in their own words