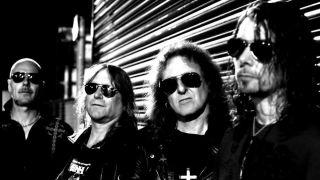 A UK rock band say they were blocked from playing a charity show after a priest saw their picture on a poster.

Seventh Son from Barnsley were hoping to raise funds for their friend, speedway racer Ricky Ashworth, who was left in a coma following a crash.

But the veteran outfit, formed in 1980, were told they couldn’t appear at the city’s Polish Catholic Centre because boss Father Tomasz Wojick thought their performance might be anti-Catholic.

Fr Wojick tells the Sheffield Star: “A lot of rock bands carry with them a wrong religious message, and they couldn’t guarantee me they wouldn’t do this here.

“It’s the picture as well – the posters signalled that this is the kind of music that is against religion. We haven’t got anything against the band personally.”

But frontman Bri Shaughnessy says: “For starters I’m a Catholic myself, so we don’t play any stuff like that. But they never even asked us anyway. He made a judgement just on how we look.”

Seventh Son found an alternative venue and the charity event went ahead. The Star says that future acts appearing at the Catholic Centre will have to agree not to play “anti-faith music.”