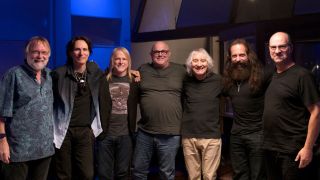 Sterling Ball, John Ferraro & Jim Cox have released the first track from their upcoming The Mutual Admiration Society album. Sugar Shack, which was originally a hit for Jimmy Gilmer And The Fireballs in 1963, features lead guitar from Steve Vai, while other guitarists contributing to the album include Albert Lee, Deep Purple’s Steve Morse, Dream Theatre’s John Petrucci, Jay Graydon, and Toto’s Steve Lukather.

Ball (son of the legendary guitar string manufacturer Ernie), Ferraro and Cox originally got together as Biff Baby’s All Stars in 1983, a band who played the Southern California club scene and regularly featured guest spots from well known musicians. Thirty years later, The Mutual Admiration Society was born after Ball approached John Petrucci to record together, and the idea eventually snowballed into an album that’s released on January 19.

“I can count on one crippled hand the amount of times I actually asked someone if I can play on their record and this was one of them,” says Vai. “When Sterling gave me the green light and asked what song I would like his excellent combo to work up, the song that came to mind was the old 1963 hit by Jimmy Gilmer and the Fireballs, Sugar Shack. For some reason, that song was huge for me when I was four years old, and it stuck! My goal with the melody was to try and retain the innocence and charm of the original.”

Steve Morse’s contribution to the album comes in the shape of Dobie Gray’s 1964 classic The In Crowd (a song later famously covered a decade later by Roxy Music’s Bryan Ferry). “Sterling and I have known each other for over 30 years,” says Morse. “I’ve always enjoyed playing with Jimmy, John, and him. This was a project that I really wanted to jump into after I heard it. After listening to the great groove on In Crowd, I asked if I could add some guitar to that. Luckily, they agreed!

“I approached it as if we were playing a show together; when John brings down the band with a certain type of snare hit, I tried to imagine us at a little club somewhere having a blast. This is a fun record, and we all got to hear the whole thing together, laughing and smiling the whole time.”

John Petrucci adds,“When I heard a few of the early recordings Sterling had done for this album and how much fun my brothers-in-shred were having playing on it, I just knew I had to be a part things; and therefore, was so thrilled when he said, ‘Of course!’”