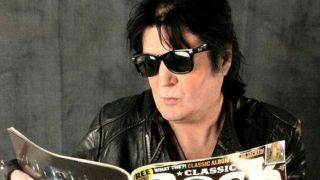 Pete Way has this week been given the all-clear after a battle with prostate cancer – and he says his experience has left him more ashamed than ever of his drug-addled past.

The former UFO, Ozzy Osbourne and Waysted bassist was diagnosed last year after he went to the doctor complaining of blood in his urine. It was that early decision to seek medical help that Way credits with saving his life.

But support group sessions left him thinking again about the fabled drug-fuelled antics of his past.

Way tells TeamRock: “I met some amazing people during my treatment. I had radiotherapy and all that stuff, and I’ll never be able to listen to an addict again tell me how hard it is to stop using. I’d say, ‘You’re fucking mad – just come down to the cancer club to put it all into perspective.’ I’m ashamed when I think of the things I did, testing every drug you can imagine.”

The 63-year-old, who’s been clean for four years, was given the good news on Monday. He admits: “I thought the blood in my pee must have been linked to the drugs I had taken down the years. When they said I had cancer I thought I was going to die. Then when they told me it was gone, it was a strange anticlimax – now I can’t use the cancer as an excuse for having a sore head.”

More seriously, he reflects: “I’m sad to say that I’ve lost touch with some of the people I met during my treatment. I have no idea if some of them are alive or dead. My heart goes out to them and their families. I was so lucky that I had symptoms, because some people don’t, and then it can be too late to treat.

“All men over 50 should go and get tested – it’s a simple procedure and it could save your life.”

Way’s solo album Walking On The Edge, which was put on hold during his health battle, is due for release later this year.