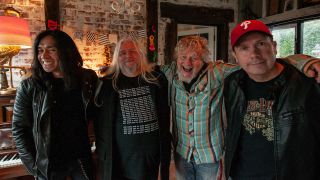 Pendragon have been announced as the co-headliners of next year's Night Of The Prog.

“It’s truly an honour to return to probably the best prog festival in the world, as a co-headline on Saturday night at Night Of The Prog," says Pendragon;s Nick Barrett." We cannot wait to play people our new album Love Over Fear with the sun going down… Should be utter magic!”

The XV Night Of The Prog Festival will take place from 17 to 19 July 2020 on the festival grounds of the Loreley Amphitheater in St. Goarshausen, Germany, which is part of the UNESCO world heritage.

“It’s great to have Pendragon at our Festival again after five years," adds festival CEO Winfried Völklein. "Their 2015 show was very powerful and now they are back with a new album. I am sure they will rock the house again on Saturday!”

Pendragon will release their latest album, Love Over Fear, in February.

Tickets for Night Of The Prog XV are available here.