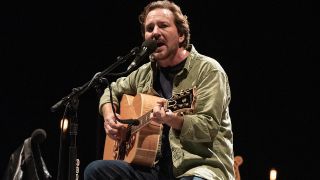 Pearl Jam frontman Eddie Vedder has been reunited with the woman who gave him a lift on her bike when the singer got lost in Amsterdam in 1992.

The NL Times report that Pearl Jam had played at Amsterdam’s Melkweg in February that year, but the vocalist found himself at venue alone with no idea how to get back to his hotel.

He asked a passing stranger for help – and she assisted the singer by borrowing her brother’s bike and giving him a ride to the hotel.

Vedder recalled: “It was ice cold, and I got a red flannel shirt that might have also belonged to her brother. I remember her hair kept flinging against my face.”

They parted ways, but at his solo show in the city last week, Vedder asked the crowd: “Is the woman who gave me a lift to my hotel in 1992 maybe here tonight?”

She wasn’t, but word got out that the Pearl Jam star was looking for her and Valeska Custers came forward, with the vocalist leaving tickets and backstage passes for Valeska and her husband at his next show in Brussels.

The NL Times say that they met backstage, and after shaking hands, Vedder said: “Thanks for the lift!”

Vedder also said his intention was to return Valeska’s brother’s shirt, but she said: “My brother said you can keep it!”

The website later posted a picture of the pair together.