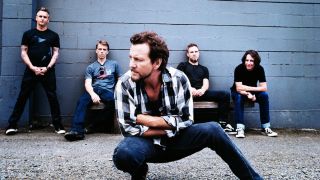 Pearl Jam have got a few anniversaries to celebrate this year. Their breakthrough debut album, Ten, turns 25 in August, while No Code, the decidedly more experimental follow-up to Vitalogy, turns 20. Then there’s 2006’s self-titled album (you can do the maths for that one).

In short, Pearl Jam have an extensive back catalogue, and over the course of 10 albums, they’ve managed to remain true to their roots. Their mix of fuzzy melancholy, big choruses and unexpected melodic twists within songs mean they’ve stood the test of time as a band that can consistently produce grunge long after the genre stopped being ‘a thing’, even if they have noticeably softened their sound over the last three albums.

The big anthems are easy to recall, but they’re not the only songs that capture the essence of Pearl Jam. There are plenty of hidden gems from over the course of their career, so here are the best 10…

There’s a feeling among some fans that Pearl Jam lost their grit at some point around the turn of the millennium, but this track from their latest album, Lightning Bolt, proves this isn’t the case. My Father’s Son is a return to the aggression that permeated their early- to mid-90s material, even if it is a bit less unruly-sounding.

Come Back might be the most Yellow Ledbetter-esque song Pearl Jam have released since Yellow Ledbetter. On this emotional ballad from that one with the avocado on the front, Eddie Vedder deals with loss and loneliness, and it’s a fitting penultimate track to an introspective record that also draws on poverty, the Iraq War and Johnny Ramone’s death as inspiration.

The measured, melancholic intro of the last track on PJ’s self-titled is the perfect opportunity to lie back, close your eyes and contemplate the topics that have been touched on throughout the previous 11 songs. It’s also the first time guitarist Mike McCready wrote lyrics for the band, and the assertion on Inside Job that “life comes from within” is an uplifting sentiment to end a sometimes downbeat album.

Despite being one of the tracks on Lost Dogs without an interesting backstory, this I Am Mine b-side is a song that perfectly captures Pearl Jam’s identity. Its combination of upbeat, jangly melody and dark lyrics hark back to the Vitalogy era, and it sounds like a seamless bridge from vintage to modern-era Pearl Jam.

You Are was generally received well in Riot Act album reviews for its yearning, futuristic sound, which drummer Matt Cameron achieved by feeding a guitar sound through a drum machine. It never makes it onto ‘best-of’ round-ups, though, despite being one of Pearl Jam’s most experimental-sounding songs to date.

Yield’s Do The Evolution has, inexplicably, gained more popularity than its snarling opening track. Both are ‘punk Pearl Jam’ in that they’re fast, raw, and aggressive, but Brain Of J has a killer riff that Do The Evolution doesn’t. The chorus, as short and snappy as it is, still manages to work in some inventive chord progressions, making this an overlooked masterpiece.

Immediately after the frenzy of Brain Of J comes the more relaxed groove of Faithfull. The sunny intro and jangly clean guitars of the verse give way the crackle and urgent chant of the chorus, capturing the uncaged energy that explodes from earlier records Vs and Vitalogy.

Yes, a theme is emerging here. Given To Fly and In Hiding are the first tracks that might come to mind at the mention of Yield, and there’s nothing wrong with that, because the latter in particular shows a spectacular return to stadium-filling form for a band who spent a good portion of the mid-90s skirting around spiky, meandering lo-fi. But the real showstopper on Yield is its first three tracks, which No Way tops off with its simple but darkly sexy groove.

The harmonica and driving, almost bluesy rhythm guitar line have all the hallmarks of a band who’d spent a good deal of the previous year with Neil Young, when they moonlighted as his backing band for the Mirrorball album. Smile sounds like No Way’s woozy, lovesick cousin, and is one of the standouts on No Code.

Choruses were Pearl Jam’s currency on Ten, especially over the course of the first six tracks. Garden is no exception, and has Eddie Vedder singing in the same trademark slur he employed on Yellow Ledbetter. Admittedly, the guitar solo is underwhelming, but Garden’s contemplative, quietly anthemic chorus more than makes up for that.