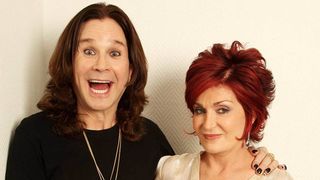 If Ozzy and Sharon Osbourne really are splitting up after 34 years of marriage, one of heavy metal’s greatest (and, to be fair, only) romances is coming to a mildly bitter end. Instead of doing a cry, however, we should be giving thanks and praise to Sharon for repeatedly saving Ozzy’s skin, arse, bacon, career and, most significantly, his life. It’s almost impossible to imagine him surviving this long without her… and here’s the evidence!

Sharon was instrumental in recruiting the three musicians that would back Ozzy as his solo career kicked off. Showcased on Ozzy’s debut album Blizzard Of Ozz, bassist Bob Daisley, drummer Lee Kerslake and, most importantly, the now legendary Randy Rhoads on guitar ensured that the Double-O hit the ground running. Imagine what a shambles it could’ve been otherwise.

Okay, so the jury is still out on whether or not the bat Ozzy decapitated with his teeth in 1982 was alive or not… but for the sake of this list, let’s assume it was alive. And thus, a well-oiled Ozzy chewed the squeaking mini-beast, the mini-beast bit him back and urgent medical attention was required all round. No prizes for guessing who sorted that out (for Ozzy, not the bat).

One of Ozzy’s finest/worst hours was when he memorably took a hefty slash on a cenotaph at hallowed American site The Alamo in San Antonio, Texas, while out of his tiny mind on Iommi-knows-what and dressed in one of Sharon’s nicest frocks. Okay, so he was already in trouble but imagine how much shit he would’ve been in if Sharon hadn’t had any frocks and he’d gone for a drunken ramble in the buff? THINK ON, KIDS.

By the time Ozzy and Sharon became an item in 1982, the then former Sabbath frontman had already earned himself a reputation as, in the nicest possible way, a massive fucking liability and professional drug hoover. That his new better half was prepared to take that on board in the name of love says a lot about her strength of character. And patience.

Not Kicking His Head In

According to most reports, the early years of Sharon and Ozzy’s marriage were punctuated by moments of explosive conflict and actual fistfights, generally in the midst of drug and/or alcohol binges on both sides. Given how notoriously munted Ozzy was for most of the ‘80s, we strongly believe that he was lucky that the famously fiery Sharon didn’t just smash his face in. She did once chuck a bottle of scotch at his head, mind you.

On one notable occasion, Ozzy was so phenomenally wrecked that he attempted to strangle his wife. Rather than chuck an attempted murder charge at him, Sharon opted for patience, forgiveness and not pressing charges. Ozzy opted for Alka Seltzer, rehab and doing as he was bloody told for quite a long time.

Heavy metal was struggling in the ‘90s. As one of the genre’s biggest (and oldest) names, Ozzy could just about compete with the new thrills of grunge and nu-metal but as with Priest and Maiden, he needed to reinvent himself to prevent a very rapid descent into the cultural bargain bin. Sharon simply organised him his own festival, ramming it with fresh and popular bands and swiftly turned it into an annual institution. Another save!

As much as diehard Sabbath fans liked to moan about reality TV smash The Osbournes, it did make for some initially splendid viewing. It also reminded the entire world who the goddamn Prince Of Darkness was, at a time when his musical career was ongoing but not exactly setting the world on fire. Admittedly, the world of heavy metal didn’t benefit hugely from one of its figureheads being portrayed on TV falling off a chair while trying to change channels, but still… Ozzy was back!

By the end, of course, The Osbournes had worn thinner than the soles of Eddie Izzard’s trainers. Such was the televisual ubiquity of the entire Osbourne clan, that the television public at large were no doubt sick of seeing cute dogs pooing on nice carpets just so Ozzy could stumble around attempting to clean it up. Taking The Osbournes off the air managed to keep Ozzy’s reputation in tact and his hands clean. Another thumbs up to Mrs O.

A fire broke out in the middle of the night at Sharon and Ozzy’s Buckinghamshire mansion in 2005. No CCTV footage of the fire is available, but we think it’s safe to assume that Sharon was the one that called the fire brigade and ushered her husband safely out of the blazing building. No offence to Ozzy, obviously, but it makes sense, doesn’t it?