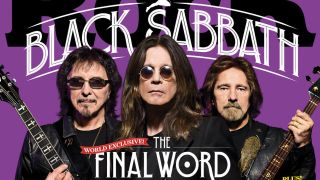 The new issue of Classic Rock hits the shelves with a resounding Tony Iommi-style BRAAANGG!!! today. That’s because we join the legendary Black Sabbath on the road in Australia as they gear up to play Download festival. We grill Ozzy Osbourne, Tony Iommi and Geezer Butler on impending retirement, drunken brawls and their untouchable legacy. But there’s one burning question: is this really the end of the road for the founding fathers of heavy metal?

As if that wasn’t enough, you’ll also find the following in the new issue of Classic Rock…

Bruce Springsteen The 80s was a roller-coaster decade for The Boss. We chart how Springsteen rode out the hype of being touted ‘the future of rock’n’roll’, by eventually scoring success on his own terms with the album Born In The USA and beyond.

Janis Joplin This lady sang the blues… and how. On the eve of the release of a superb new documentary, Janis: Little Girl Blue, we look back at the high-flying but fractured career of rock’s first female superstar.

Gene Simmons The gospel according to Kiss’ founding bassist/vocalist, aka the stackheeled God Of Thunder (and rock’n’roll). And as expected, he says: “You can never have too much money.”

Dan Reed Back in 1987, Dan Reed and his Network seemed destined for glory. Their self-titled debut album was a funk-rock tour de force and Reed was a frontman as good-looking as Jon Bon Jovi. But the hits never came – and a crack pipe beckoned.

Whitfield Crane The frontman of Ugly Kid Joe – once dubbed the worst band in the world – has many a torrid tale to tell. For starters, have you heard the one Eddie Van Halen’s socks?

Lone Star How the arrival of punk rock killed the career of one of the most promising Britrish rock bands of the 70s. Or did it? Cue tales of car crashes, Scientology, bong pipes, Elephant Beer, Jimmy Page and much more.

Pendragon They might be the great unsung survivors of prog rock, but don’t you dare call them a relic from a bygone age.

Raw Power
Looking to buy a portable Bluetooth speaker? The KEF Muon is probably as good as it gets.

Tax The Heat
Six burning questions, six answers from the Men In Suits.

The Stories Behind The Songs: The Darkness
“I was naked in the vocal booth…” This and more revelations behind I Believe In A Thing Called Love.

Q&A: Stephen Stills
On new supergroup The Rides, being considered as a member of the Jimi Hendrix Experience and if he’ll ever play with Neil Young again…

Heavy Load: Shirley Manson
“We worked our arses off and it was never enough.” The Garbage singer on music industry greed, weirdos and more.

Get a copy of Classic Rock 224 delivered to your door or subscribe and get it every month.