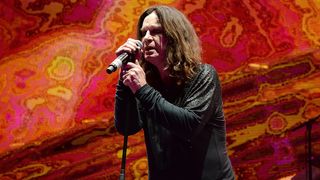 Ozzy Osbourne says that he’d like to record another album – but is reluctant as he thinks it would be a waste of money.

With Black Sabbath bringing the curtain down on their career earlier this year, Ozzy has no plans to retire – but a new record from him might be a long way off.

He tells Rolling Stone: “I would like to do another record. But it’s wasting money. Nobody’s buying. You don’t have to sell that many records any more to get a no.1. Depending how many records you’ve sold. You can have 30 or 40! Nobody buys them.”

When asked what he thought about Gene Simmons’ “rock is dead” comment, Ozzy replies: “Live, good rock music is not dead. But I think the record industry is really suffering now. There are only about two fucking record companies left.

“When I went to the Grammys a couple of years ago, there’d be artists who’d go from a fucking laptop straight to the charts and release a record.

“It’s really a sad thing for me. It’s just changed so much. I said to Sharon, ‘It’s like when vaudeville ended and fucking modern music began. We’re the history now.’

“And no matter what gimmick – what colour album, vinyl, whatever, the fact of the matter is people don’t want it. Why should people buy records when they can download it? You can get anything now online. And at the same time, I don’t know how to turn the fucking light on the monitor.”

As for his thoughts on the end of Black Sabbath and possible retirement, Ozzy says: “They’ve retired but I haven’t. It’s like I’m jumping off one boat on to another.

He adds: “People around my age go, ‘I’m 65 now. I’m retired.’ Then they fucking die. My father got a bit of cash from the job he had, did the garden and died. And I’m going, ‘That’s a bit of an anticlimax after working so many years in a factory.’

“I ain’t retiring. People still want to see me, so what’s there to retire from?”

Black Sabbath will release concert move The End Of The End on September 28. It was shot during the final show of their farewell tour earlier this year and features backstage moments along with onstage footage.

Ozzy has a handful of solo shows lined up for later this year. Find details below.