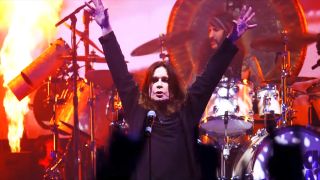 Black Sabbath have released a new trailer for concert movie The End Of The End, shot during the last show of their farewell tour earlier this year.

The metal icons bowed out in their home city of Birmingham, but made sure the cameras were rolling so the event can be enjoyed in 1500 cinemas around the world for one night only on September 28.

In the new clip, the band can be heard describing the end of the tour as a “death sentence” and admitting they have to deliver the best Sabbath show of all time.

The End Of The End features live scenes from the concert along with backstage footage and studio performances of tracks they didn’t play on the night.

Black Sabbath said recently: “To bring it all back home after all these years was pretty special. It was so hard to say goodbye to the fans who have been incredibly loyal to us through the years. We never dreamed in the early days that we’d be here 49 years later, doing our last show on our home turf.”

One of the reasons behind the band’s farewell was guitarist Tony Iommi’s cancer treatment, which left him less able to tour than he’d been in previous years. He told Classic Rock in February: “The most annoying thing is people asking, ‘How’s retirement?’ I have to reply: ‘I’m not bloody retiring – we’ve stopped touring, that’s all.’”

After Forever: The Inside Story Of Black Sabbath’s Greatest Tour - review