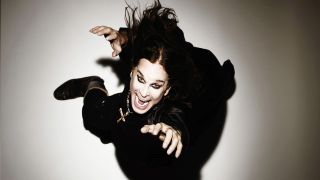 Ozzy Osbourne performed his classic track Bark At The Moon during yesterday’s solar eclipse in Illinois – watch the video above.

The Black Sabbath icon and his band started performing a few minutes before the world went dark as the moon passed between the Earth and the sun, around 1.20pm local time.

He was in the middle of the song at the peak of the event, which lasted around seven minutes in total.

Ozzy told the crowd at Moonfest 2017: “I don’t think I’ve ever been in this part of the world before. I love you all. Thank you for coming to see me.”

The show was part of his current US tour, which features returned guitarist Zakk Wylde, He has three dates still to play – dates below.

Black Sabbath will release concert move The End Of The End on September 28. It was shot during the final show of their farewell tour earlier this year and features backstage moments along with onstage footage.

During the film the band can be seen discussing the reasons for their retirement and their understanding that they have to deliver the best show of their careers.

Thinking Out Loud: Ozzy Osbourne on drugs, retirement and that ant incident